No, there’s nothing wrong with the rod holder; but I have realized that I have been doing something unconsciously that I need to let users of the “Samurai” System in on.   I made this discovery this past Friday on a Jack Crevalle trip.  I built a new personal system “Just for Skiffs” and I thought that since I didn’t have a paddle to deal with I would wear the rod holder and bucket more to the front.  I thought it could save me a second or two.  I had done it before (with smaller rods) and had practiced this at home in the yard and was happy with the results; however, on my first fish I grabbed the rod (guide’s rod) and when I pulled, it didn’t come out.   I pulled harder and I lifted the holder and bucket because the  big 11 wt was sticking in the holder.  I had to grab the holder with my right hand and hold down to make enough resistance to pull the rod loose. I had never had that issue before.

The incident forced me to think about what was different.  I had used the guide’s rod on previous trips and it never gave me any trouble.  It turns out that with the rod holder toward the front I was gripping the rod with the thumb up instead of reaching back behind me with the thumb down.  I moved the system to the back of my hip like I normally wear it.  The result was I naturally reached for the rod with my thumb down and, without thinking, I simply pushed the rod holder with my thumb and the rod slipped out easily.   I realized that I have unconsciously been doing a little push with my thumb as I pull on the rod which pushes the rod holder down and away.

No one has reported this issue, but this incident made me think about new users and the fact they may run into it if they are grabbing the rod thumb up.

I played back some video and its easy to see the little push I do with my thumb.  You can see it in the still images below: 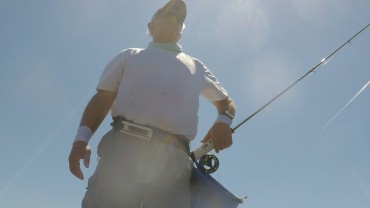 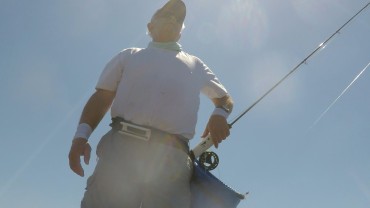 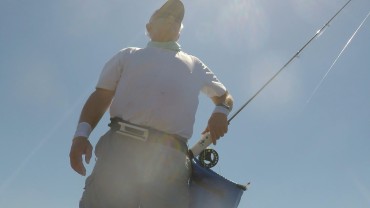 I also made a short video of the thumb push.  (Note the video and pics were made back before creation of the current stripping bucket, in the days of the blue, canvas bucket.)

It’s a small thing but it’s better to have been told than to have to figure it out yourself.   Someone using smaller rods might not notice as the rod wouldn’t have the tendency to stick, but the best way to use the system is to wear it kind of gunslinger style with the bucket low on the hip and to the back.  With the bucket worn “gunslinger” the caster turns his hand thumb down to grasp the rod, which is the right position to use the thumb to push.

All that said, I do intend to take some fine grit sandpaper and the slot on my rod holder a little bit since I know my guide’s rod sticks a little too much.  Just a little sanding should eliminate it.  A little stick is good of course, it keeps the rod from bumping out unintentionally.  And even with the sanding,  I will stay with the gunslinger style and using the thumb push.

I know this “epiphany” is not earth shattering, but small things can make a big difference.  My apologies to every one for not making this realization and publishing it sooner.