It was an early start, left Jackson at 2:30AM to meet our guide at the ramp before daylight.  As dawn broke we were headed to the flats with slick seas.

It was a beautiful morning, the kind you dream about.  The photo below is our guide standing ready with the teaser rig.  Fish were already busting and chasing mullet and we had high expectations. 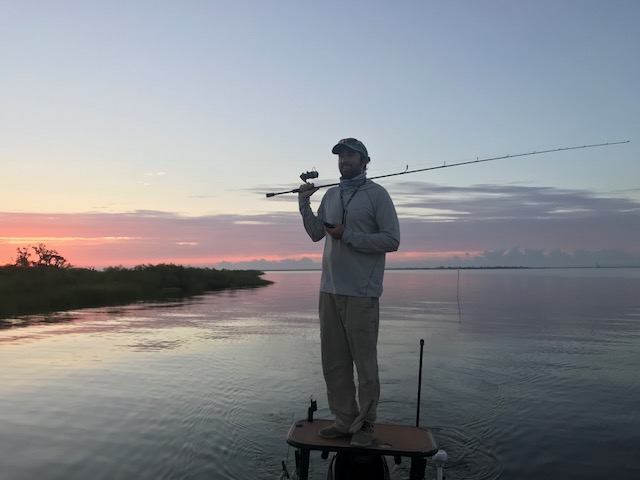 Son Chris was feeling the effects of the early morning start in this photo below. Behind those shades, the eyes are closed. 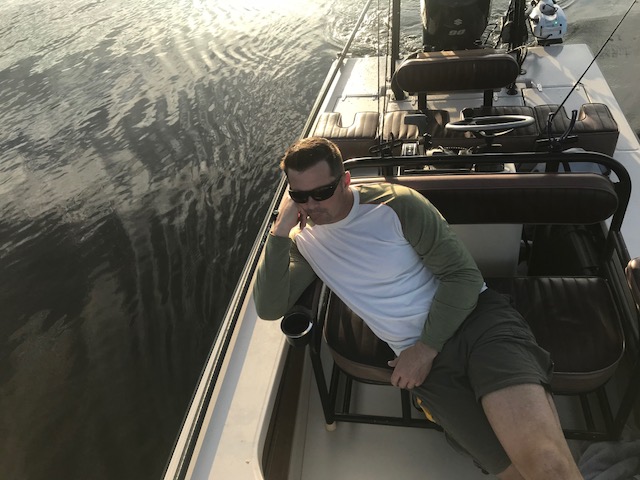 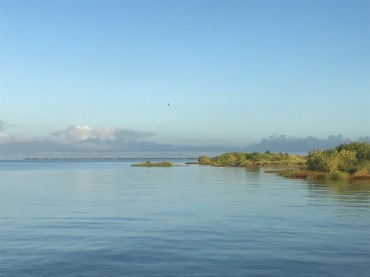 The fish we saw blowing up on the flats were further out than we needed as we were hoping to catch them running the shoreline. As it turned out, our expectations were too high, it was a tough day.   I’m not sure what the problem was but we saw very few pushes, probably due to the mid-day high tide and the recent surge from the hurricane.  We did manage to put some flies on some fish, but they were sulky and wouldn’t take.  I actually watched one fish swim by my fly and then turn and swim back and behind the fly before heading to open water.  It was like he was trying to get away from it.  Oh well.  We never got a fish hooked.  But we were blessed with a beautiful day and I had a great time regardless.

This popper is the fly we started with.  Note in my personal system I’ve added a “big fly” keeper that is very fast and works perfect every time.  The 11 wt fits nicely and the Rio Tarpon line held snugly with the large grommet of the line locks. 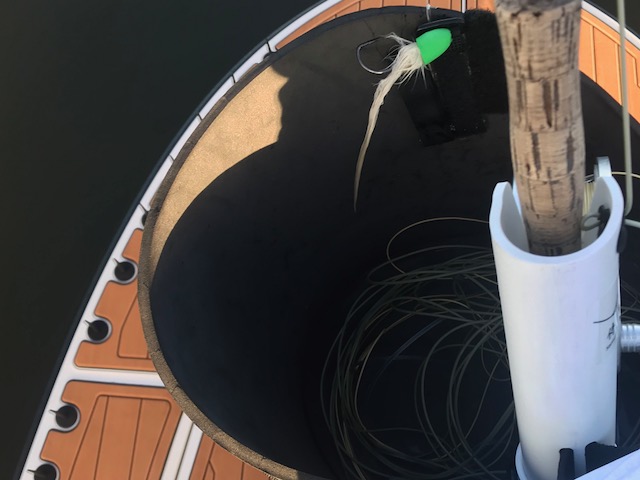 Note also the beautiful decking that Miles had installed with rubber line tenders which turned out to be a great help in keeping the line on the deck.

The “Samurai” System is a great asset when doing long waits with the big rods.  Here is Chris below with the 11 wt, “cocked and locked”, ready for a push.

We captured very little action on the video camera, mostly due to operator error.  I had the GoPro in “photo” mode when I thought it was in video and missed a shot where the guide was teasing up a fish and Chris was casting.  Nice blowups on the teaser, but I missed it all.  Chris did catch the following sequence of me casting to a cruising Jack.  It was a good opportunity, I got the fly in front of him and he followed and looked like he would take but then swam by the fly, turned around and took another look and then swam behind it to open water.  You would hear my frustration if I hadn’t deleted it in editing..  Our guide said I was stripping long and fast, the usual, but these fish seem to want short and furiously fast.  He showed me an example and I’m going to work on it.  I find that in the super fast strip I keep missing the fly line with my fingers.  I’ve been practicing the short, furious strip gripping the line using all my fingers instead of just the thumb and forefinger and it seems to work better as at least one finger finds the line to grip it for the strip.  I don’t know, needs work and field testing.  I told Chris I “practiced for the trip but not the strip.”

Toward the end of the morning clouds began collecting and threatening rain.

When we saw the rain moving in it was already at the ramp.  We had no choice but to get wet.  But what is any outdoor adventure without a little adversity?  It didn’t prevent us from having a good time.  We were just pleased we had managed to find slick seas and pretty skies just two days after hurricane Gordon, “Gordy”, passed through.  A destination fly fisher or “fly-in” had cancelled, we were on the short list of go-to locals, got the call, and we knew enough about hurricanes and weather to take advantage.  The fish didn’t cooperate, mostly due to high water I think, but that’s just fishing.  I’ll be back on another day.