I created the “Samurai” System for kayak fishing but soon found out that it is for skiff fishing too. Of course I bank fish with it also.  Basically  I don’t go fly fishing without it.  I might practice on the lawn without it but if I’m fishing, I have it.

My old system is looking long in the tooth and I thought I might be a little embarrassed to take that ugly thing on my next charter and decided to build a new personal.  Since I was going to build a new system, I decided to update it just for flats fishing.  I am extremely happy with the results and most of these new features will become part of the standard system.

Of course, the main difference, since it is made for skiff use, there is no paddle holder and no holes for the strap.  Next, I wanted the bucket to be more stable, jiggle less and have a slimmer profile.  To make it more stable I added two inch, heavy duty Velcro on the belt and on the side of the bucket so that I can pull the bucket up to my side, the Velcro will make it more stable and at the same time, give it a slimmer profile, which may aid in moving around on the deck.  Being more stable will prevent extra motion of the bucket which can jiggle loops in the stacked line in to one another and cause tangles.  I can easily kick it out for easier stacking and/or stripping if I want.  When I want to lock and load the system for what I think could be a long wait, I can just lay it back against the belt and the Velcro will hold it stable and closer to me for moving around. 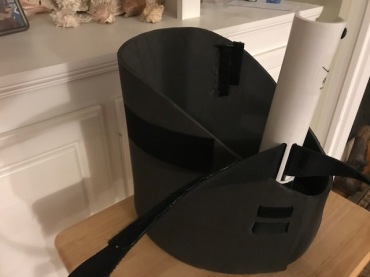 I ditched the belt buckle when I realized how well the heavy duty Velcro worked and just added long strips on the belt to serve in place of the buckle.  I kept the belt long so that the connection is on the far side of my body to keep the connection away from fly line. Without the buckle I’ve gotten rid of one more thing that fly line can get on and the belt is just smooth with the connection behind me on my far side from the bucket.

The bottom of the bucket is the same, I’m satisfied with the plastic loops.  The bottom of course is removable to help it lay flat because flats boats are famous for their lack of hatch storage room. 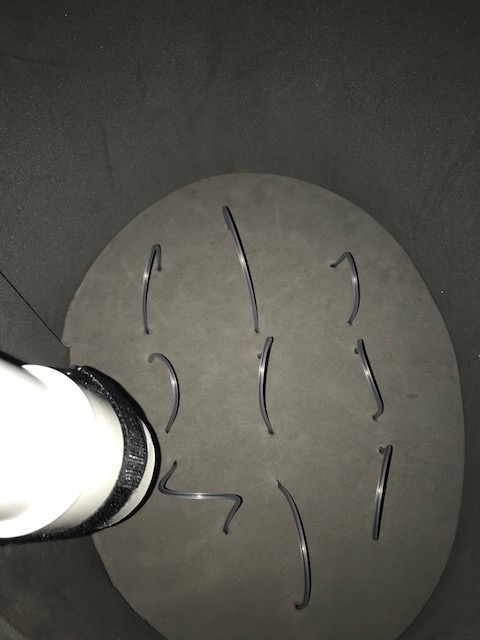 The last thing is a new fly-keeper for flats use.  The Velcro will still be there but I wanted a faster disconnect to save maybe a second or two when pulling the fly loose.  I am using a plastic rectangle with a cut in it that allows me to just pull up on the fly to release it.  I’ve played with different configurations and I’m happy with the current one.   It’s just for those situations when I know we are on fish and I am on full alert.  I haven’t abandoned the Velcro fly-keeper, it’s great and the good thing about it is, if you put slack in the system, the Velcro won’t drop the fly.  The only issue with the Velcro fly-keeper is that it can take a second, maybe two, to pull the fly loose.   The new release is faster but if slack is introduced the fly CAN fall out, so it is only for when I’m on the casting deck and on full alert.

I’m really happy with the new changes.   I’ve been practicing with it and I think it will give me just a little added edge on my upcoming Jack Crevalle trip.