I just got back from a trip to southern Louisiana with a friend, booked with a popular and well-known guide.  The guide had called to let my friend Rusty Hook know about a cancellation and the fact that conditions might be favorable (sun in the forecast) for sight casting to big bulls .  The big bulls are known for coming into the marsh to warm up in the shallows and winter is the only dependable time when big bulls are known to hang out in the shallow water in any numbers.  He reminded us that time is running out on the big bull fishing in the shallow marshes right now as the Spring rains will soon be here and the Mississippi river will be bringing muddy water down, plus the weather becomes very unpredictable during the “Ides of March”.

It was 39 degrees as we left the motel on our first day, going by the temperature gauge in my friend’s truck. Warmer weather would have been better, but, this was winter fishing after all. The sun was out and it was predicted to stay that way most of the day, although the winds were forecast to be +12mph.

It didn’t take long before we found fish but my first opportunity was on a fish of about ten pounds coming down a shoreline.  Dropping the fly in front the fish several times with no reaction, I was getting my first lesson in winter fishing, this fish wanted nothing to do with my fly, no matter how I presented it.  The fish didn’t spook, he just didn’t want anything to do with the fly.  Giving up on that fish we looked out and saw a big shadow on the flat and as the fish turned toward us I thought I had a chip shot.  But again, this fish, even though it was a definite bull, wanted nothing to do with the fly.  The fish was big enough that we just couldn’t leave him like we did the smaller fish so we followed him. After quite a few casts, the fish appeared to get irritated and whirled on the fly, stirring up the mud, limiting my visibility.  I felt several times what I thought was a bite but when I tried to set the hook, there was nothing there. Apparently the fish was just nipping at the fly instead of flaring his gills and sucking the fly in like I needed him to.  I even changed rods with another fly but with no better results.  I had to give up the casting platform with no fish even though I had shots at what should have been two easy fish.

Rusty ran into the same problem of the lethargic fish not wanting to eat, but finally convinced a nice bull 30 lbs to eat the fly, which resulted in high fives all around and a little relief to find out that the cold fish would in fact eat.  We managed five fish for the day, but they were hard won as the fish were obviously cold and difficult to convince into taking a fly.

The following day started out clear and cold with little wind but as we arrived at our flats, the clouds moved in and hung on all day but for a few brief periods of sun.   I caught the following fish during one of those sunny periods by casting to a shadow in the water that turned out to be a 23 lb bull just laying in the mud.  Dropping the fly about six inches in front of the widest part of the shadow it was fun to see the fish flare his gills, shaking the mud off his body which had been camouflaging him and making him suddenly materialize into a redfish.

I had used the “Samurai” system all day, not necessarily “cocked and locked” all the time, but certainly the stripping bucket was helpful in the wind.  I absolutely hate having the wind blow the fly line all around on the deck and, of course, OFF the deck.   Our guide recommended that I not use the bucket because “everybody spends all their time looking in the bucket”.   That may have been his experience but I think that’s proof that most folks just don’t use a stripping bucket until its windy and therefore, they’re simply not practiced in its use.   Since I use my system all the time in my kayak, I am able to load it without looking, keeping my eyes on the water.  In fact it tends to help me keep my eyes on the water rather than the opposite.  The guide is a favorite of mine, so I just ignored the comment.  I find that everybody wants you to do what they do, like there is no other way and guides are the worst.  Of course, good guides just want you to catch fish and I pretty much take all their advice, but sometimes I can’t, because I know what I know.

On the casting platform, I kept the fly hooked in the Velcro which allowed me to warm up my stripping hand without jeopardizing my readiness.  Sometimes, to rest my hands and warm both hands I would set up the system with the line locked so I could put both hands in my pockets.  My cast to the fish in the photo above began with stripped fly line in the basket, while I was holding the fly rod in my casting hand, my stripping hand resting on the stripping bucket.  I had little time to cast as the boat was moving  by the suspected shadow, but I just quickly snatched the fly loose without taking my eyes off the fish and made the cast. I am sure I made the cast as quickly as if I had been holding the fly in my fingers.  The system keeps me ready at all times.  Many folks pull out a good bit of fly line when in the ready position, but I think that’s a mistake. Short fish, really short fish, often show up right by the boat and that extra line becomes useless slack and a hindrance, not a help.  Also, that extra line swinging around under the rod is just a rod/line wrap waiting to happen.  I keep the fly in the Velcro, about six inches of fly line out of the tip and I push lightly with my rod hand to keep the fly line tight.  This also allows me to keep the rod pointed low, just above the water, helping to keep from making long shadows and giving me a tight line which I can use to flick the line out on my first back cast.  Tight line good – slack line bad.

After the experience of my Andros trip and two redfish trips where I have used the system for skiff flats fishing, I have to change my first statements that the “system” is not for charter boat use.  You don’t need the paddle holder of course on a skiff because both hands are free, but the system still has great utility.  For example, sometimes the fish are numerous and the possibility of a double hookup is high, but keeping a second rod out with line stripped out on the deck is asking for trouble.  All that extra loose line laying in the boat is just waiting to be stepped on when your buddy with a fish on steps back for you to take the platform for a shot.   Without having line stripped out, valuable time has to be taken to get line out to cast which can result in a lost opportunity.  I just keep the “Samurai” system “cocked and locked”, leaning the fly rod holder over to the side so that the rod stays out of the way of the guide’s poling efforts and my buddy’s casting.  My hands are free to eat apples, keep them warm in my pockets and I have both hands available to assist in keeping my buddy’s stripped line from blowing off the deck or tangling.

The last fish of the day was definitely the best.  With heavy cloud cover and and a heavy chop, spotting fish was down to seeing the pushes or seeing the fish with some portion of their body out of the dark water.   I was on the platform as we pushed by an oyster bar and we spooked a couple of fish which left nothing but a swirling mud cloud.  I noticed some nervous water further out on the flat.  Nervous water is often mullet, but not having any better options we pushed out towards it.   Suddenly a bull came up and flipped over for just a second before disappearing and I made a quick cast to just in front of where the head had been and was immediately rewarded with a strong “thump” on the line.  There was no lethargy in this fish and it took me and my 8wt quite a while to work it in.  31 lbs, 39 inch length, 23 inch girth.  A nice end to a cold but successful trip. 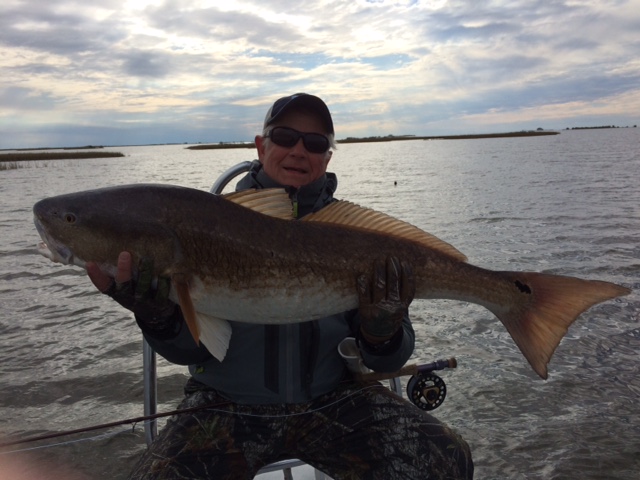