Recent back-to-back trips to Venice for big redfish and to Andros, Bahamas for bonefish gave me a unique comparsion of fly fishing for the two different species. All sight casters are accustomed to getting excited instructions from the guides when stalking a fish, but until the bonefish trip I wasn’t aware of the differences in fly fishing tactics between redfish and bonefish. In fact, I’m still not perfectly clear, for example:
Louisiana Redfish guide: “You need to yank it when you strip, your strips are too smooth, make’m jerkier, don’t let him get a good look at the fly. Now, strip, strip, loooong strip, don’t stop moving the fly, if you stop the fish’l lose interest! Move your rod tip if you have to! Just don’t let the fly stop! There! He ate it! Strip-set, hard! You should burn your fingers or you’re not doing it right!”
Andros Bonefish guide: “Strip, strip, smooth strips, don’t yank it! Now, loooong strip, now stop. Stop! You have to stop! That’s when he’ll take it. Good, now, he took it! Keep bringing it tight! Pull hard, harder, now let’em go, he just set the hook himself. That’s it! Remember how you broke those other fish off doing that hard hard strip-set and moving your rod hand. You do either of those when he runs and he’ll break you off every time!”
Louisiana Redfish guide: “Sweep it if you run out of line to strip, just keep that fly moving! Did you ever see Jose Wejebe on Spanish Fly? Yank a couple of times with your rod low and make sure that hook is set!”
Andros Bonefish guide: “You’ve got to stop moving your rod hand. You need to put that rod butt in your belly and never move it. Just strip with your stripping hand and bring it tight with a good pull. If you do a hard strip-set and step back or move that rod hand he’ll break off when he runs”
Angler to bonefish guide: “I guess I have some habits carried over from redfish. My last redfish guide called me “Matador” from my sweeping the rod hand to keep the fly moving when I got down to the leader, but he didn’t seem to mind if that’s what it took to keep the fly moving”
Bonefish guide to Angler: “Hmmm, well if you wanna catch bonefish, leave the “Matador” at the lodge, strip into the tip-top if you have to, but DON’T move your rod hand and when I say stop, STOP!”

These are seemingly conflicting instructions I received during two back to back trips, one for big redfish near Venice LA and the other for bonefish around Andros Island, Bahamas.
This wasn’t the exact dialogue as it is paraphrased, but these were the basic instructions. Of course I am sure some readers will have heard even more conflicting instructions, but the guides were, in my opinion, the cream of the crop.

Every angler has his epiphany and mine came in Andros as I listened closely to guide, Shawn Riley. As I did everything he said, correctly (finally), I felt the line come tight and as I pulled harder in a smooth strip, the bonefish exploded and I could feel the hookset in my hand just before the line hissed through my fingers. After that fish I caught bonefish after bonefish and even accomplished the Holy Grail which was spotting the fish and then doing everything right to catch the fish as my guide stayed completely silent, like a wise teacher allowing his pupil to go solo.

The bonefish trip was outfitted by Eva’s Bonefishing Lodge on North Andros, Bahamas. Donated by Jason Edgecombe, owner of Eva’s, a friend won the drawing but then for reasons out of his control, couldn’t make the trip and he offered the trip to me.

After making the short flight from Nassau to Andros and a forty-five minute taxi ride I arrived at Eva’s and was met by the staff which wasted no time in getting me settled in the spacious accommodations, including a gourmet meal of lobster and rice pilaf, which was only a precursor for meals to come. 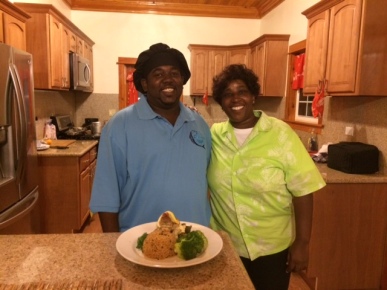 The food at Eva’s was excellent, breakfast every morning at 5 with eggs, bacon, even pancakes, a box lunch on the boat and great multi-course dinners at night.

Out in the flats the guide would pick up a conch and the staff would make delicious conch fritters, conch ceviche and a delicious conch/lobster mushroom soup: 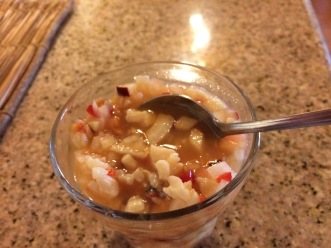 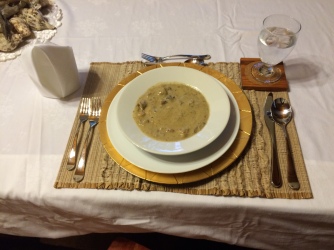 I had my doubts about my first day on the water as it was raining, but then as we launched the boat we looked up to see a rainbow. The promise was true, though the weather continued to be cloudy and windy, the rain was shortlived.

The rain stopped just as we reached our first flat, and though it remained cloudy, the guide had no trouble spotting bonefish right away and my fight with the learning curve began. Having a bad case of “buck” fever, the first several fish just went to experience. The first couple of takes I broke the fish off by using my rod hand to set the hook. I just was not prepared for the explosive runs that bonefish make, but as I learned to just bring the line tight and pull hard, but not too hard, the fish began coming in the boat. 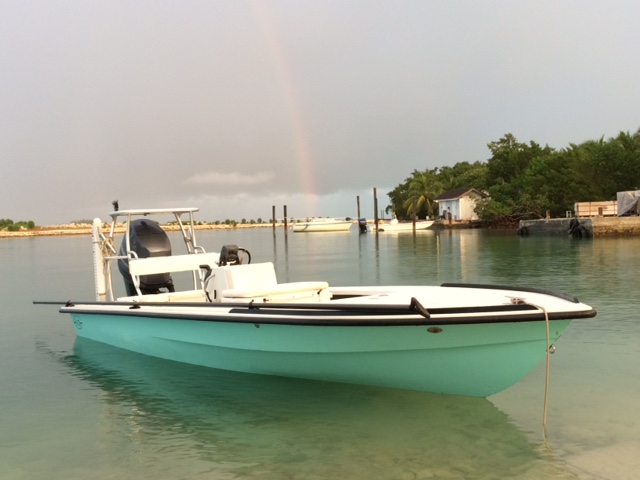 As the tide moved out and the flats became shallower, we anchored the boat and began wading the flats. The wind was high, making the flats choppy which was actually helpful in that it was easier to get close to the bigger, spookier fish. 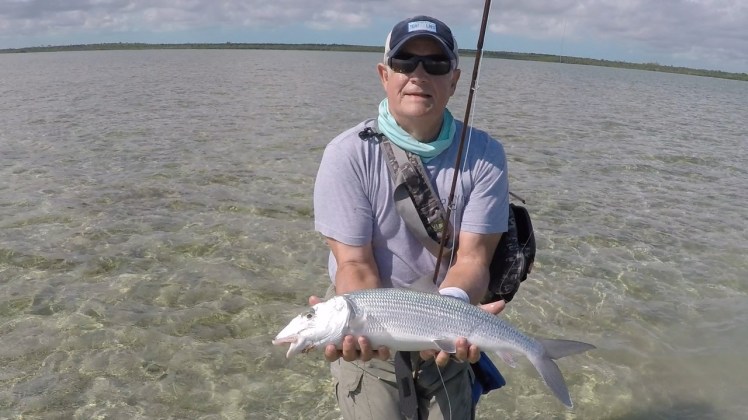 The following day was much prettier, with more sun, but the wind was still high. So the flats fishing was challenging, but the sun made it easier to spot the fish and the choppy water made it easier to get a cast to them, resulting in many more fish coming to hand. 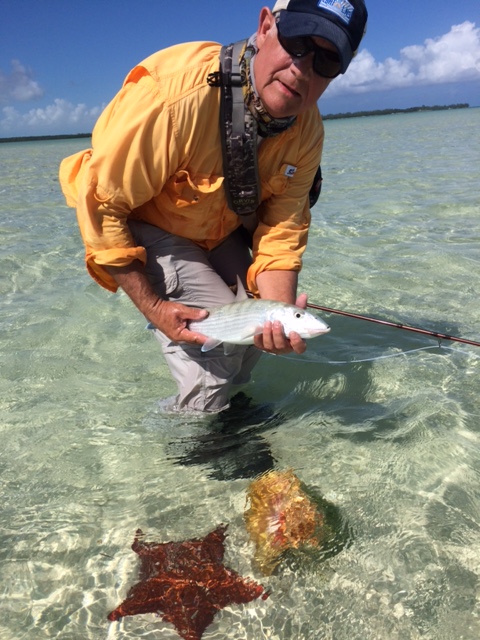 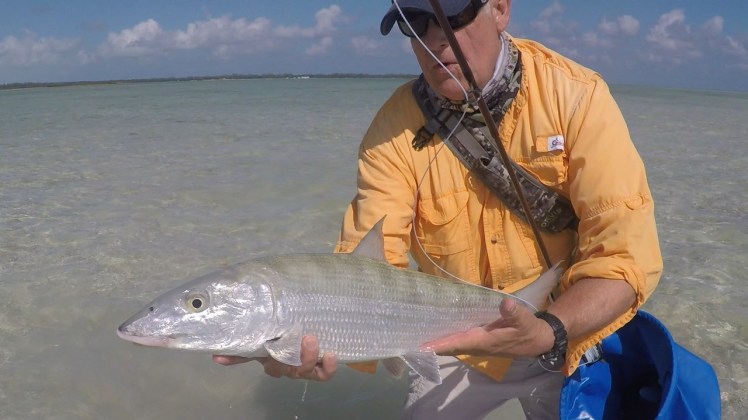 I have to say that Eva’s Bonefishing Lodge was a first class experience and would recommend it to anyone looking for a bonefish adventure.
http://evasbonefishinglodge.com/ (405) 547-0010