I’ve become interested in single-hand spey casting. The Spey casts are just more arrows in the quiver of a single-hander. There’s always some situation of minimal back cast room or need for an efficient change of direction, for example. To help understand the casts better I’ve started watching two-handed Spey casting videos.

I found a video on the 2019 Spey-O-Rama, held in San Francisco and for some reason, I was reading the rules and regulations for the event (I may have too much time on my hands). My curiosity was piqued when I ran into this statement regarding the casts which could be used in the tournament:

“Casters can use whatever cast they choose (except the Perry Poke)”

That confused me because, with single hand rods, I’m a big proponent of the Perry Poke and Tongariro, the latter being an advanced, single-hand Perry Poke. Those two casts are the single best things I have learned since I learned the double-haul. Perplexed, I continued trying to find out more about why the Perry Poke is not considered a valid cast in the Spey-o-Rama.

Rewind to 2012 where I found a blurb from the 2012 Spey-O-Rama rules that specified the Perry Poke was allowed only with Skagit type equipment, meaning short heads. The rules mentioned that allowing the Perry Poke with longer heads might “steer the interest from spey rods to switch rods”. That sentence seems to reflect the purists have a beef with it of some kind. I kept looking and found a thread on a spey casting forum spawned by a question about the Perry Poke cast. My take from the thread’s commenters is that the Perry Poke in the two-handed Spey world is thought of only as a recovery cast (although everyone on the forum admitted to using it).

In my quest for understanding I bumped into information on Skagit casting, where the Perry Poke is more or less considered one of the basic casts. In fact I recently bought a Skagit line for my single-hand and learned that a Perry Poke can send a heavy micro-jig sailing. I quickly realized I didn’t especially need a Skagit line for my mostly still-water lake fishing here in MS and I didn’t like the heavy floppy line. There are no steel-head here in MS, most of the big rivers are not wadable and they are all full of logs, branches etc which will hang up a sweeping streamer in a New York minute. My purposes are served better with a long head on a floating line delivering micro-jigs, nymphs and even popping bugs. The Perry Poke excels with that set up as well.

Could it be that since the Perry Poke came along late, accomplished casters considered it to be a hack needed only in the case of a crashed anchor? If so, it’s too bad a two-handed Spey caster discovered it because it and its cousin the Tongariro are as big of an advancement to single hand casting as the double haul, in my opinion.

From my experience, few people in the single hand casting world even know what a Perry Poke is. That’s a shame because it is so easy and effective. Unfortunately beginning fly casters are only taught the static roll cast. I guess I know why too, because it’s the only roll cast in the single-hand FFI certification process… Folks who think they are going to go through the certification process and come out as a really knowledgeable caster are going to be sorely missing out on a really useful cast.

So what does the typical static roll cast instruction look like? Let’s take it straight from the horses mouth, the FFI. Their FFI video instructs students to:

All well and good, if, like the video instructor, you’re standing in a stream facing downstream with the current pulling any slack out of your line and keeping it aligned with the rod tip. Almost anyone could make a decent roll cast. But instead, most often, new fly fishers are being taught to do the static roll cast on grass and usually without any kind of anchor aid or in a lake with still water.

I practice the static roll cast on water at the office and at home where I only have a grass lawn to practice on, I use my roll cast anchor tool, 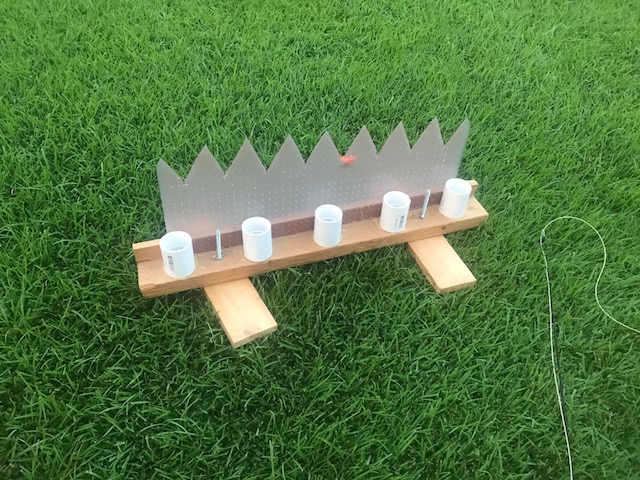 I also practice on grass with no anchor other than the weight of the line because I know eventually I will be asked to show it when I’m on a lawn somewhere with no anchor tool. My practice is my only credentials, I’m not a CI, nevertheless, watching the roll cast tutorials by the casting aficionados I have come to the conclusion that we are doing newbie fly casters a disservice by not teaching them to Perry Poke. If you watch an FFI video on roll casting, the instructor stands in a river facing downstream. The line is kept straight and with no slack. I mean anybody could easily learn to roll cast in those conditions but then be disappointed when they have to use a roll cast on a lake.

The static roll cast has its place, but the Perry Poke is easy and far more effective. We should teach both to newcomers. If a new fly caster learns the Perry Poke and then how to add a haul to it, they are in Tongariro land. If they just learn to add some additional slack, they are on their way to 70 foot casts and almost eliminating the need for overhead casting. Almost, because like all casts, it’s still just another arrow in the quiver.

Maybe since the Spey casting world and the Skagit casting world seem to be similar but separate disciplines, exemplified by the Spey-O-Rama rules, the Perry Poke could be the glue that holds it all together. I say that because it works well with both long heads and short heads, single-hand, switch or Spey rods.

Oh well, I know folks might not like what I’m saying, that’s why I called this “Poke’n Fun”, but I do think beginning fly fishers should be shown the Perry Poke right after the dynamic roll cast, the latter just as often used by fly casters as a way to organize or re-orient line as it is a fishing cast.

Now, let’s all fight about what I’ve said…