A friend and I saw an opportunity to fish what looked like a promising summer tide recently and though parameters were not really that great,  we took a chance.

This is the tide we were expecting below:

So you can see the flat top red line over the blue peak meant the tide hung on too long because the wind changed to southerly.  So instead of the falling tide uncovering the fish, the lingering high tide kept them covered up.

So instead of sight casting we chose to drift clousers off of what I call “Vanishing Point”, which is the point next to Bayou Cumbest.  This point is the subject of my MDEQ RESTORE project 4248.  As you can see by the two photos below, the point has receded by almost 40 feet since 2014 when I originally entered the project.  Erosion at Point-Aux-Chenes is approximately ten feet per year.  The photo on the left is pre-2014, the photo below is of my friend fishing what is left of the point during last week’s trip.

A study by the GCRL estimates that 850 acres of this area will be lost by 2042. But you know the ballpark, fiber optic cables, and wooden promenades the RESTORE money was used for will be long gone or obsolete even before then. Rebuilding the batture or protecting the shoreline could save it for fish, wildlife and humans for a thousand years, in my opinion.  The proof is in the Indian middens, still there after many thousands of years (white area in the foreground of pic on the left).

The trip wasn’t a complete loss, my friend managed a couple of fish, including a nice ladyfish.  I managed to hook a nice flounder by dead drifting a clouser in the outgoing current (below).  Yes, I kept it, which is not like me, but I sure wanted some fresh fried flounder.  It was delicious!

The trend of RESTORE projects going to urban projects reminds me of an episode of the old sitcom “Coach”.  The coach was lamenting to his wife her purchase of an old painting by a famous artist.   She said “but it’s timeless.”  Coach replied, “yeah I know, but I just wish we could have spent to the money on something that would last, you know, like a bass boat.”

A bass boat.  Timeless? I don’t think so.

So just think of these RESTORE projects, a ballpark (future hurricane fodder or at a minimum, urban decay), sidewalk promenade (wooden, need I say more), fiber optic cable (5G anyone?), pharmacy program (salaries!), aircraft hangar (really, I mean whatthe… nevermind) and many more similar projects. Now think of the marsh and its many benefits to wildlife, fisheries, and of course, humans and how a few hundred thousand (or maybe millions) of yards of cultch material could preserve the Point-Aux-Chenes from ten feet of erosion per year.   Which is more “timeless” or, rather, which do you think would last longer?

And I think everyone knows it is far more cost effective and easier to simply preserve a natural setting rather than artificially rebuilding it, which you can’t even do really.   I watched a show documenting how New York city provides water to its many citizens.  They begin by preserving the good quality water at the source all the way to the consumer.  Makes sense.   I see valiant efforts at marsh restoration and I hope they work, but if you simply plant grass, that doesn’t mean you have established all the nutrients and variables that made grass grow there before it disappeared.   Better to preserve and then work out from there. 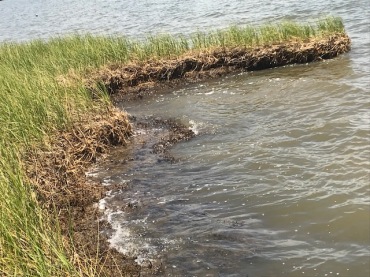 So you decide.  I currently am pursuing funding ($1,500) for Troy University to study and provide shoreline protection measures for Point-Aux-Chenes.  The study would be used to further justify protection measures and estimate the costs involved.  So far I have been turned down although I do have some promising interest.

Help me protect the Mississippi Point-Aux-Chenes shoreline for generations to come.

#magnoliaflyfishers
They’re biting again! This slab at the office is the first I’ve caught here since April. #magnoliaflyfishers
I made a short video of a spoon fly in the water and put it here because the Magnolia Fly Fishers meet Thursday night and Albert Wood will be tying the epoxy spoon fly. We have five nice fly boxes from Orvis as door prizes, need to plan the Oct trout trip and maybe a Christmas party. #magnoliaflyfishers
Finally in the marsh on a good tide withgood weather. Here goes nothin’.
Making a few spoon flies, had planned to be in the marsh today but thunder storms had plans to be there too. My spoons don’t look too great but Albert will show you how to make’em right at our September 22 meeting. #magnoliaflyfishers
Went on another hwy 465 Rough Fish Rodeo with Greg and he showed me the ropes on Contact nymphing with his own properly rigged rod and terminal tackle and... I got it! Caught whatever this is in the most roiling chocolate shake mixture of water i’ve ever fished. Hooked numerous fish, lost most of them because they were either just too big for the 3wt or they were foul hooked. We foul hooked many because the sensitive rig was “feeling” the fish when the fly bumped into them. I get it now. It was a heckuva lot of fun. Thanks Greg, now I’m looking at Euro rods!
Tying some small #6 crabs
Tied a little #6 shrimp for the smaller reds of our MS coast. Light landings are important with spooky rat reds. Fished y’day with Greg. We did our annual rough fish safari. Greg was the man, catching numerous gar, gou and even a 4 lb bowfin (choupique, grinnel)). I was far behind but i did manage a few gar and even a decent crappie.
Albert got into some nice bream...
I think I’m on to something with these shrimp. #magnoliaflyfishers #orvisjacksonms