I’m still fighting post deer season depression.  I am starting to watch the weather to plan a sightcasting trip in the marsh, but my mind keeps wandering back to a couple of great days I had on the reservoir last year catching bream, bass, catfish and stripers during a Hexegenia mayfly hatch (Hexapocalypse Now!).   Last year I was unprepared because the hatch happened so fast.  First we got a call that someone had a bug on a windshield.  When we checked it out, the fish and bugs were there but my fly box was sparse.  The next time it happened I was better stocked but not much.  One thing I learned from last year’s fishing was that the best nymph fly that I had was my buddy Albert’s “Killer Bee”.  Even though I had done research, found exactly what kind of bugs they were and tied what I thought was a pretty good Hexegenia imitation, the Killer Bee did the best. 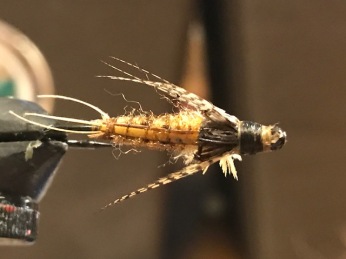 Oddly, my “match the hatch” imitation didn’t really seem to do that well.  So, with time on my hands, I did more

research and found some great photos at troutnut.com. Looking at them I suddenly realized why the “Killer Bee” worked so well.  The Hex nymph is largely gold and black.  It also is unique in appearance, having a long set of gills alongside the abdomen.  The “Killer Bee” has wings on it and since it’s fished subsurface, the wings, after they get soaked, tend to lay back on the body of the fly, which may approximate the long gills of Hexegenia.  The gold and black variegated chenille is just the right color.  Whatever the reason, it was the best fly we had when the fish were hitting subsurface.

With this knowledge or “rationale”, I decided to try and tie a better Hex nymph imitation.  I tried several and though I now have a box full of “more accurate” imitations.  I even tired some special articulated versions to try and imitate the strong swimming actions of the Hexegenia.  But, after all that work and some field testing, I think I’m just going to fill my box with Pat’s Rubberlegs and Killer Bees because the imitations just aren’t vast improvements.  But they are definitely harder to tie.

Another thing that relates to fishing hatches on the Rez is something that occured to me when I was reading about other invertebrates found in the Rez.  Chironomous attenuatus is apparently found in great numbers.  Looking at photos I found a site that has photos, note that it looks just like a mosquito, see Midge .

Seeing that photo of what I would have thought was a mosquito but was instead a non-biting midge made me think of an incident on the Rez.  Nathaniel C, was showing me and my buddy Albert how to find the mayflies on the reservoir.  We spotted birds hopping in tree branches in the distance and motored over.   Well the bugs in the trees weren’t mayflies, Nathaniel said they were mosquitoes.  And they looked like mosquitoes. Heck, they may have BEEN mosquitoes except I remember one thing, while standing and fishing the bream that were under them, I wasn’t being bitten, even though there were what I thought were thousands of mosquitoes in the trees.  I think there is a good possibility that they were in fact blood midges, Chironomous attenuatus.  Of course a mosquito imitation works for both as a dry, but the nymph version of the blood midge looks like a little red worm.  Apparently the red larvae of blood midges contain hemoglobin, which is unusual for insects.  the nymph or “larvae” are similar to a San Juan worm but only 1cm in length and kind of curled.  I have had people tell me that guides had them cut a San Juan worm when it wasn’t working to just to about that length, and then it suddenly became productive in catching trout.  I wonder if cutting the worm made it look look like a blood midge? Possible.

There are many patterns for the blood midge, here is one: https://www.ginkandgasoline.com/gink-gasoline-fly-patterns/the-cdc-blood-midge/

I will be filling my box with my newest Hexegenia imitations, 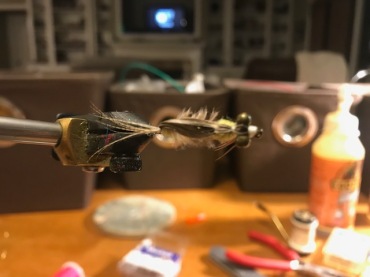 but also mosquito dries, blood midge nymphs, Pat’s Rubberlegs tied with black and gold variegated chenille, and my buddy’s “Killer Bees”.  I will also be taking some Tiny Muddlers tied with the gold and black chenille, comparaduns,  mayfly imitations in grey/brown and some large Elk Hair Caddis, which seemed to work well last year as a cripple when pulled through the surface film.

Here are photos of actual Barnett Reservoir mayflies, duns on the left, adult (spinner) on the right.  Grey duns (subimago) and brown adults (imago) were the primary colors, with occasional yellow/brown ones sprinkled in.

Nathaniel uses white poppers and I have used them with success and the poppers are more likely to get taken by the bass and stripers which often show up to come cruising through the stacked up bream.  We have yet to catch crappie on the mayfly hatches.

So, if anyone is wondering about what to take to the Rez, that’s how I’m stocking my “Hexbox”.

The fly we wait for is Hex
Close up they look like T-Rex
For a bug on a windshield we wait
For the event we just can’t hate
(The Hex hatch is better than sex!)