Made a little weekend run to Louisiana with sight casting buddy Rusty Hook for a guided trip with Miles Larose (@Shallowsouth on Instagram).  Had a great trip, even though we were far short of our 25 fish day back in April of 2015.

Saturday was the first day and though it was clear and pretty, a storm had passed through on Friday and Mother Nature was running the blow dryer as she usually does after a big storm. Winds were high, and it was cloudy early so we opted for a mid-day start.  The water was super clear in the grass, but it was challenging in the high wind.  We boated four and and had another fish pull my poorly tied blood knot through.  I had been using a freshly tied Black Charlie, Lefleur style.  The trip planning had come about quickly leaving no time for me to inventory and tie up extra flies and after I rummaged through my fly box I realized I was out of freshly tied Black Charlies, a fly I prefer in clear water.  Except for one.  One very special fly that was in my box for more sentimental reason than anything else.  It was an old fly I had caught many fish with, tied using my border collie Jumpy’s black hair.  The dog was long gone but the memories weren’t.  The fly was beat up, no paint remaining on the lead eyes.   God only knows how many redfish  had been caught with it.   I tied it on, with 30 lb, checked my knots and fished the rest of the day with it, catching two nice pumpkin colored reds along with Rusty who also caught two.   Guide Miles Larose is pictured below with several of our first day fish. 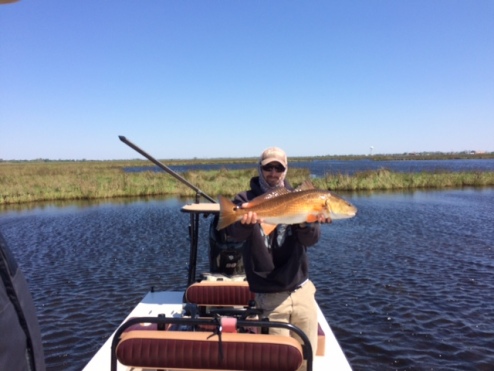 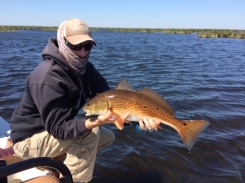 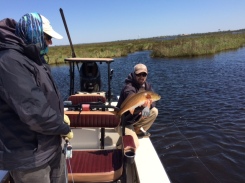 The second day was forecast to be much better and oh it was nice.  I have had very few days in the marsh as pretty as this past Sunday.  Clear skies and very low wind, but of course, high pressure.   I wasn’t fast enough with the camera but we passed a bald eagle just sitting on a point next to the grass.  You have to get out of the house to see that kind of thing. 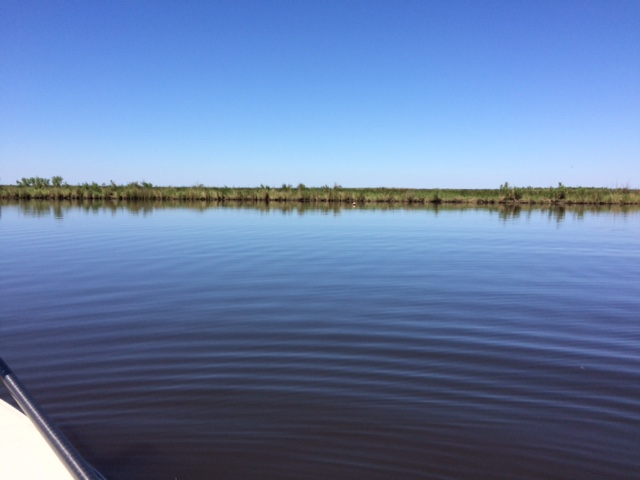 The morning fishing was fairly hot although we fished a different area from the previous day and had trouble finding clean water.   My Black Charlie tied with the black border collie hair wing was still catching fish.

Right around lunch, the tides basically stalled and the fish became lethargic.  We spotted many fish, all sizable fish, but just couldn’t get them to take, even when we practically hit them in the lips with the fly.  We took turns casting at these fish with neither of us able to hardly get a second look.  I’ve seen this happen many times.  People often say that a redfish will always bite, but it’s just not true, if they are uncomfortable from lack of tidal movement, salinity, oxygen, high pressure, whatever, they get lockjaw just like any other fish.  After trying various flies, Charlies, Zonker flies, crab flies, we finally decided it was time to break out the spoons.

Though the fish did remain fairly lethargic, we found some of the smaller fish to still be active.  I guess that makes sense, the kids are always ready to play while the adults just want to take a nap.  That’s the way it was at my house anyway.

Finally, Miles directed my vision to the shore at two smaller fish happily working down the bank.  Casting 90 degrees to the boat with the rod hand on the inside is one time you must cast with your rod straight up, to keep the line from coming through the middle of the boat, but that’s the most accurate casting plane which helped me to drop the spoon at the bank, almost hitting the bank, just about two feet in front the fish.  I bumped the fly when Miles directed me to do so, and I think I heard one fish say “Ooh, piece of candy!” and our tenth fish of the day was hooked. 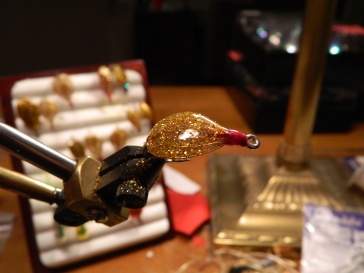 So the spoons delivered the last few stubborn fish of the day, but my dog fly had delivered up until then.  This time I’m retiring it for good, I think it has seen its better days and I can’t make a new one.  He was such a good dog! 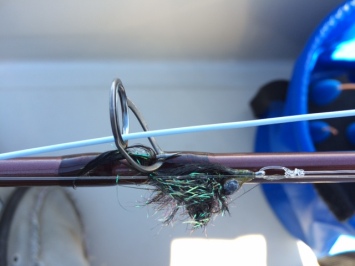