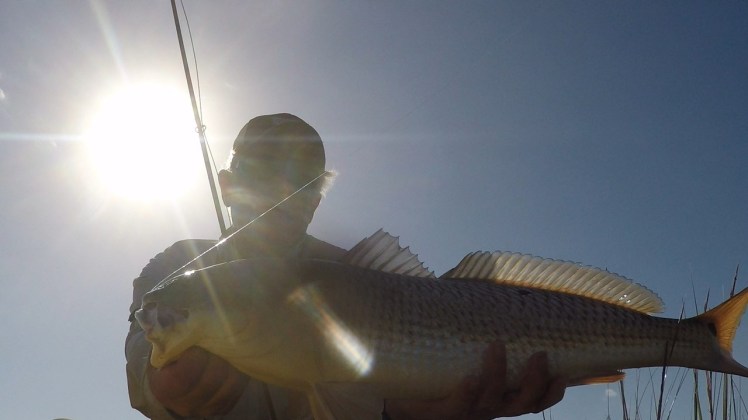 This is one of six I caught Tuesday.  Sorry about the sun in the background, the GoPro doesnt know any better. But if it looks like I have a halo around my head, the angels WERE singing when I caught this one…

The wind was horrible, the nearby gauge history shows 8 meters per second.

Roughly, 24 feet per second. Not a great day to push a kayak in the wind and sight cast to redfish.  I must confess though, I had help.  The wind had almost beaten me.  I had all but given up and, having nothing better to do, I started eating my sandwich while tucked in a little creek in the marsh. Pelicans and seagulls started diving in another creek about 50 yards away. I watched them but couldn’t see what they were after and I didn’t see any fish activity. I almost just waded over there it was so close, but I figured I was out of options so I decided to do it right.  I pushed around the point and over to them. It was a small but long marsh creek or bayou, whatever you would call it, only about 30 yards wide. Then I saw what was happening, a school of 8-10 redfish swam in chasing minnows. They caught me by surprise but I caught a small one off the back of the pack. After I released him I looked up, (the water was a clear as a bell) and another school was swimming by and I cast to the lead fish, the one in the top photo, and caught him. After that I followed the birds and when there weren’t any birds I just looked for similar looking creeks. The wind had the bait pushed up in the little creeks. I used a marabou clouser all day. Was fun but man was it a lot of work.

So I learned a little.  These birds were gulls, those are the ones you really need to follow.

The other tip I learned was a technique for fishing really windy conditions.  You know, when you push the boat on the left and the boat just turns to the right. Push on the right and the boat goes right.  Of course, in that kind of wind, if you see a fish, the wind will just blow you away from him, turn you or put your right on top of him.  I countered the wind by fishing small creeks and pushing into the wind and keeping the boat against the grass and pushing on the opposite side.   For example as I pushed into the wind I pushed on the left with the boat against the grass.  The boat was forced to go straight and I kept pressure on to keep me from being pushed out into the creek.  Watching the opposite bank I was able to pick the fish off as the schools came down the opposite bank.  I was only able to make the casts because I had control of the boat.  Free floating I would never have been able to control the boat enough to make the cast.  I know because I blew quite a few shots when I was free floating.  24fps wind will blow you into them or turn you around or away.  Basically it just makes a fool out of you.  Yes, the Samurai System was a huge help even though I couldn’t stow the paddle.   To keep the wind from blowing me out I just pushed the paddle  into the mud next to the boat, using it to keep the wind from pushing me out, which gave me time to grab the fly rod.

It was fun, but it was a lot of work.  I had postponed my trip to give the wind time to move out during the good tides, but, the wind was still hanging on.  I cancelled the next day because, though it was fun, it was not conditions I would choose. And I was exhausted.

It was very difficult to do almost anything, so video was just not possible.  It would have been ugly anyway! 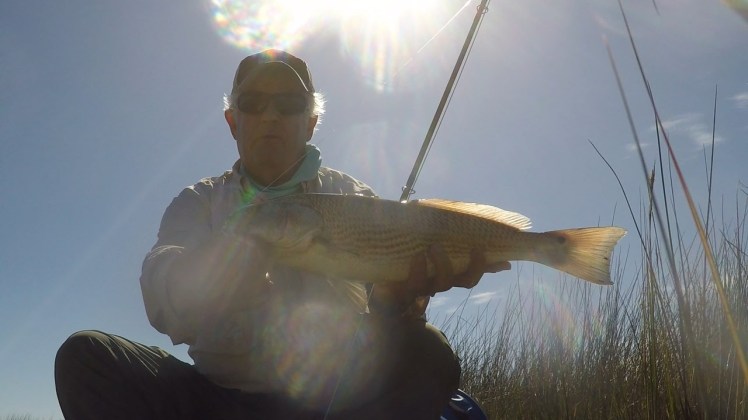