Well true to my word here is an update on my “musings” about heading to the river for one more shot before the river rose too high.  I wanted to see the river at VB 24.5 hoping that a little higher water after the river had been fairly stable might put some fish on the rocks.

Unfortunately this stage is a little too much for kayaks as you can see in the photo below:

Fortunately I did have a nice little gar rodeo on fish hanging just behind the big rock in the photo above.

I did see pelicans, gulls and cormorants on the opposite side, but when I paddled over the current was so strong I had to beach and attempt to fish from the high bank above. There was an undercurrent, but the water was strong and very muddy, due to the rise. 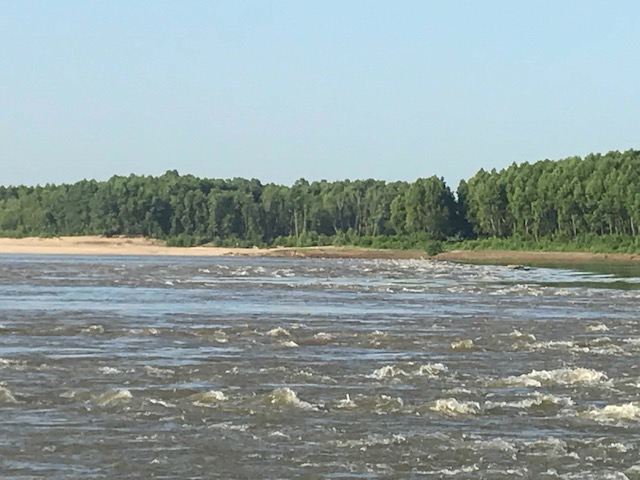 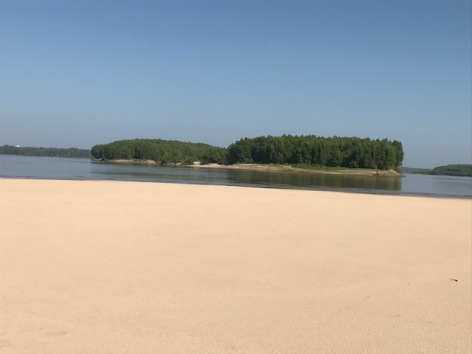 I paddled around and looked for uncovered jetties in between islands that might be holding fish.  Unfortunately most were covered in water and when there were some rocks exposed, gar were all I found.  But I am never terribly disappointed with the big river.  It always amazes me. 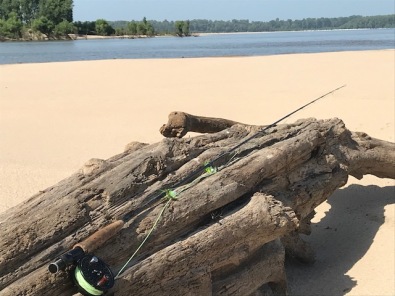 In the photo on the right, the white line between the trees and the water is actually hundreds of white pelicans, something I had never seen on the river before.   I understand white pelicans stop by the Ross Barnett reservoir on the winter migration, but this was the end of June on the Mississippi river.  Just one more thing to enjoy on the river.

The pelicans are easier to see in the photo on the left.  I tried paddling out to them to get a better photo but the current picked up and I was struggling to defeat it.  Considering the blistering heat, I thought I better pace myself as I am somewhat prone to heat exhaustion.  I abandoned the pelican photo op.

Instead, I tried a short section of jetty in between some islands that I was hoping would

be holding rock hounds.  Though it looked great, there were only gar.  Anyway, I did have a fun day even though I was tempting fate in the dangerous heat.  I really think some striped fish were there, I just couldn’t get to them.  But now I have solid documentation on VB 24.5 and know my best numbers are in between 24.5 and 22.