Friday, May 4, my son and I took the “May the fourth be with you” serious and made a suicide run to the marshes of Louisiana for a DIY kayak trip.  Chris and I both had a bad case of cabin fever with all the hunting seasons being over.  To Chris and I, sight fishing redfish from a kayak is about as close to hunting as we can get during fishing season.

The tide was already pretty high when we left the ramp and we hadn’t gone far when Chris became interested in a pond which was usually too shallow to fish. With the higher water, it seemed to have enough water for our kayaks to get in.

The pond was choked with coontail which is a thick aquatic plant.  We both had black Charlies on, which is a soft fabric fly made from cactus chenille and marabou or craft fur.   Just looking across the pond from the entrance, it looked all quiet, but one thing I have learned is that you can’t see all the activity from a distance.  You have to close the distance to pick up the subtle nervous water, especially since the coontail laying on the surface dampens disruptions pretty quickly.  As I got further back in the pond I started seeing tails coming up, figure eighting and making triangles on the surface.  I got excited and started easing up on the fish which were nose down in the thick coontail.  I stopped and took my first shot long, at about sixty feet, to make sure I didn’t spook my first fish.  It is very difficult, from a kayak especially, to tell which way a tail up fish is facing and too, they constantly turn as they root around on the bottom.   My cast was a couple of feet from the fish and when I took the first strip, the fly immediately hung up in the coontail.  When I pulled it loose it was heavy, the soft fabric fly was covered in  coontail fibers and had to be cleaned by hand before the next cast.  I realized that this wasn’t going to be as easy as it looked.  I think this was my first experience with having tailing fish in the middle of thick coontail grass.

Looking across the pond I saw Chris in full “Samurai” mode with his rod sticking up high with a bow in it from being cocked and locked.  I was glad to see he was maneuvering his way toward a tailing fish.   It’s always fun for me to see other people use the “Samurai” system.  I wonder what the non-fly anglers think when they see one of us with that stripping bucket on our hip with the long fly rod sticking straight up and bowed at the top as we work some shallow pond they couldn’t possibly get in.  I know they think we’re crazy.  They just don’t know what fun it is.

Well there should be a fish photo here, but there’s not.  Chris managed a hook-up but the fish came unbuttoned.   We worked numerous fish for about an hour and a half but the thick coontail made it really difficult to get a fly to the fish and often when we got a follow we would get a rejection because the fly was covered in grass. We quickly realized that we had to switch to spoons to be able to backcast hard and jerk the grass off the fly,  which was inevitably on it after every pickup.  We also realized that our only hope was to drop the fly down vertically straight to the fish without any strip, which was excruciatingly difficult as it required perfect accuracy and the luck of the fish being oriented correctly to see the fly in the thick coontail.  After about an hour and a half,  the fish went down to hide and rest in the coontail and our fun was largely over.  But we had a ball during that time with  follows, taps, boils and explosions just no fish to the boat.  Chris did get to stretch his line with what appeared to be a really nice fish.

After the fish went down we continued to work other ponds, but the wind kicked up and clouds moved in.  All of  the ponds were also full of the thick coontail.  We saw a few more fish but as it is with kayak fishing, they were too close when we spotted them.  I had intended to find some specific ponds that I knew had thick algae in them which prevented the coontail from growing, but WE GOT LOST.  Actually we would have said “we weren’t lost, we just didn’t know where we were”.  Then toward the end of the day, after the clouds had moved in, we found the ponds but we were on our way home, the sight window was lost and we just couldn’t make it work. 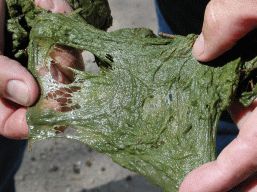 The filamentous algae stays on the bottom mostly which provides some water free of grass and provides a lighter colored bottom enabling sight fishing.  It’s nasty stuff if you let your fly fall to the bottom and get in it but the algae evens the odds some and redfish do seem to like hanging out in ponds that have it.  If we could have found those ponds when the sun was out I am sure we probably would have done much better.   I have had really good success in them on previous trips. Oh well, “shoulda, woulda, coulda”.  Chris and I had a great time and we learned a little more, as we always do.  We can’t wait to go back.