Made a quick trip down to Louisiana to fish with good friend “Rusty Hook”,  who prefers to remain anonymous.  Rusty was fishing all week but work would only allow me to fish one day and I picked the middle of the week to help accommodate by business schedule.  It had been windy and cold on Rusty’s first day, Monday, but guide Miles Larose managed to put Rusty on two good bulls.  The following day, Tuesday, Rusty had to sit out because the winds were so high.    I arrived around 6:00 Tuesday night, January 30, at the guide’s camp near Chalmette and we went to a nearby restaurant, “Charlie’s”, for dinner and to talk fishing over some char broiled oysters, which were good, not great.

The following day was predicted to be fairly low winds, clear and not as cold, though it was still in the thirties and the forecast was for a high in the high fifties.    Of course Wednesday was also the day of the trifecta of lunar eclipses, being “super”, “blue” and “blood”.   Rusty and I were thinking mostly about fishing and were not interested in the moon, no matter how many adjectives it required to describe it.  We just hoped it didn’t have an affect on the fishing, unless it was good.

As we headed out Miles asked us to guess what the water temperature was.  Rusty guessed 49 and I chose to opt out as I didn’t have a clue.  The temp was 52, which was a good thing as we’ve heard from our guides that below 49 the fish tend to be lethargic.

Well, the fish were not lethargic.  If anything they were too darn spooky, either that or describing them that way is just my way of blaming the fish for some of my casts that were less than stellar.

I managed three nice bulls, but one was long distance release that came unbuttoned after a long fight just before he made it into the boat.  I think Rusty caught three also.

The fish below was the best, guide said approximately 25-26 lbs.  I am sure we cast to several in the thirty pound range.    I got some advice from the guide after I made an on target cast to a big fish and put it right in front of his nose and he spooked.  I had been trying to put it on their nose because big fish are usually not afraid, but Miles advised me that “if they are cruising,  cast the fly a few feet in front, if they are laid up, put it right in front of them”. 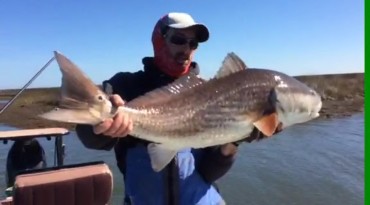