I made some notes about stand-up vs sit-down fly fishing from a kayak this weekend.   I wanted to make a short trip to a friend’s lake for a little bream fishing and my Kajun Kayak was hanging up in the garage but my 14.5 foot sit-in which I have had for about 20 years was outside on a rack and easy to get to.  Actually it is the kayak I started with years ago, I bought it primarily for deer hunting and then turned it into a marsh red fishing kayak when I got the bug around 2002 or 2003.  The photo below is my son using the yak, which is not really designed for stand-up but it works well regardless.

The issue with my sit-in is that I can’t wear my belt because the stripping bucket doesn’t fit when I sit down in the yak.  That is actually why I made the stripping bucket fit onto the rod holder with just velcro, it’s easy to yank it off and put it on whenever I stand up and I figured other kayakers would have that same problem.   My son uses my old kayak and so I had him in mind.    Before the new foam bucket, I used a blue bucket version which had straps that just hung on the rod holder.  It was really easy to take off and put on so I made the foam bucket easy as well.

Of course this weekend I was just bream fishing and so when I got tired I just sat down in the yak since I wasn’t sight casting.  I was pulling the bucket off and just letting it sit in my lap as I stripped line into it. 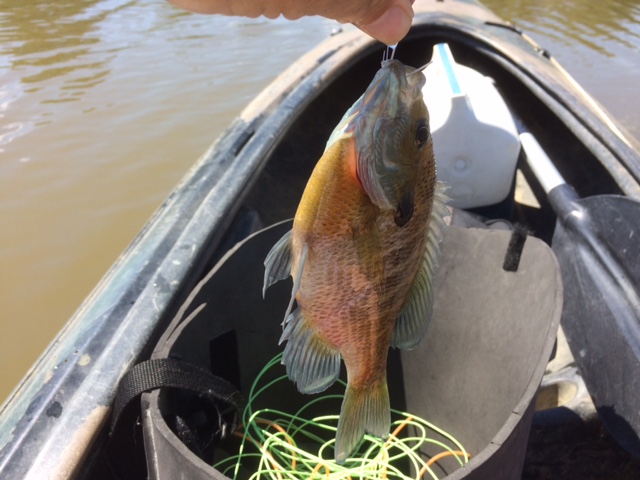 Now that I use my system all the time, regardless of whether I am sight casting or not, I really feel that folks are missing out by not using some kind of stripping bucket for line management.   I was able to bring the fish in and keep my line in the bucket and my casting was not hampered by the line hanging up in the boat.

The experience made me appreciate my Kajun KC12 which is the best kayak for stand-up which I have used so far, but the point of the article is that I also made several observations while sitting and fishing that I guess I had just forgotten about :

Of course, many newcomers to kayak/SUP sight casting with a fly rod just don’t realize all of the benefits standing provides so I thought I might list them:

Well, those were the observations I made and I guess I wrote them down as a reminder to myself but hopefully this will be helpful to others.