After my fourth of July success with white bass I monitored the river levels closely for a return to the 23.5 mark where I had found good water.  An online forecast comes out every Wednesday, published by the Army Corps of Engineers.  The forecast is very accurate, especially if you use it for only a few days out.  I saw that on a Thursday it was going to hit 23.4 so I called my son (below), who is a fireman, to see if he might be off that day.  You can see Chris was stuck with using the SS 1.0 stripping bucket.  That’s OK, he’ll get an upgrade soon. 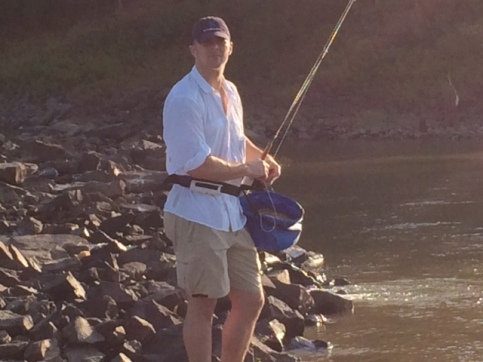 He was in fact off but he wouldn’t get off until 7:00 AM which, considering the drive, would have put us in the heat of the day at the end of July.  Since he had the following day off and could leave early we decided to go then, even though the water level was predicted to be 22.8.  I thought it would still be in the good range.

Well, unfortunately, that one day lag allowed the river to drop to 22.5, a little too low.  Flow had stopped in my favorite channel, the water just below the top of the levee (above).

Our main levee (above) was rushing plenty of white water though and we started on the eastern side of it looking for fish.  As we worked the long rock line of rocks, basically a “rock island”,  I thought of  Webb Wilder’s song “Loud Music”  which has the lyric “Loud music is a forty-dollar fine in Amarillo, Texas, down the Rock Island line”.  Rock hound is my pet name for stripers so it seemed appropriate and I was singing it in my head as looked for those rascally “hounds”.

Strangely enough, along with the absence of white bass and stripers, the gar and skipjacks were missing too.  We finally decided to get in the kayaks and paddle all the way to the opposite side of the channel and try  a corner where the water swings around in a circle.

There was an eddy that formed off the white water and then swung toward the bank and came back along the edge of the jetty back under the whitewater and next to the rocks.   At first there was no action casting into the seams but then I let my fly dead drift and follow the current.  When the fly came back to the edge of the white water the current pulled it quickly in a straight line underneath the white water and against the rocks.   I felt a solid “thump” and set the hook and caught a chunky striper.  After that fish I did the same thing again, letting the current suck the fly under the rocks and caught another striper.   That became our tactic, letting the handy little current take the flies to the fish.

The fish were almost all 3.5 to 4 lb stripers, not a white bass.  When I checked the tongues of the fish, the familiar deer hoof print looking tooth patches were present.  Two patches mean its a striper, one patch means white bass.  Of course this doesn’t necessarily indicate a pure striper, as Larry Nicholson of the striper program on the coast once explained to me that several other indicators have to be looked at.   The fish we caught had flat shaped heads, clean even stripes and lean bodies along with the deer print on the tongue, which was strong evidence that the fish were in fact pure “sea runs”.

My interest was piqued when I caught a very small striper.  Natural reproduction in the MS River is suspected and the small fish, I thought, could be possible evidence.  Unfortunately I didn’t have any of the capsules Dr. Mickle of the striper recovery program had given me to capture DNA with, so until I can get back, we’ll have to continue to wonder. Without the scissors and formalin filled capsules to snip a piece of him, I would have had to kill fish to obtain DNA.  Considering the apparent abandonment of the striper recovery program, its just as well.  I can only hope that natural reproduction is occurring and continues.

I have an upcoming trip to NOLA for Jack Crevalle with  Capt. Miles Larose.  Apparently Jacks are a target fish at this time of year.  This will be my first time for Jack Crevalle, I have caught juveniles but never any mature fish.   That trip has me very excited because it will be fast casts and potentially long casts to pushing fish, which is all right up my alley and the “Samurai” System will get a work out, hopefully.

Guide Peter Scafaru, marshonthefly.com, sent me this pic of a Jack he caught recently:

My brothers’ company, Breambugs.com, is now carrying a saltwater line of flies and he has provided some flies which I think will work well on the Jacks.  Now, if I can just borrow  a 10 wt 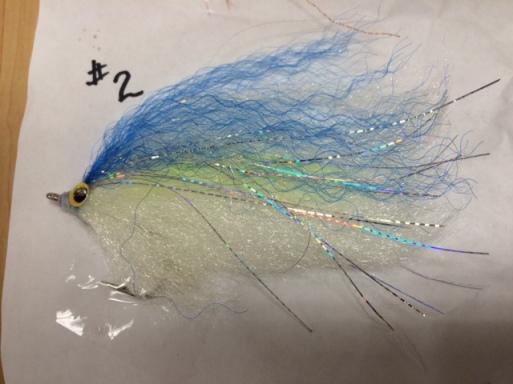